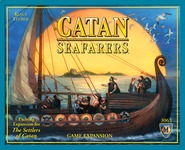 Part of the Catan Series.

This game requires The Settlers of Catan. Ideally, using the same publisher and edition of the game.