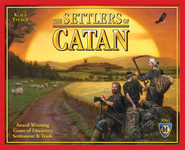 Description: In Settlers of Catan, players try to be the dominant force on the island of Catan by building settlements, cities, and roads. On each turn dice are rolled to determine what resources the island produces. Players collect these resources to build up their civilizations to get to 10 victory points and win the game. Multi-award-winning and one of the most popular games in recent history due to its amazing ability to appeal to non-gamers and gamers alike.

Settlers of Catan is the original game in the Catan Series.